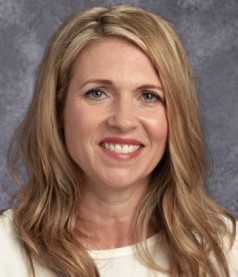 Following 19 years of service as Naperville Central High School’s assistant principal for curriculum and instruction, Jackie Thornton has been selected as the school’s next principal.

The hiring of Jackie Thornton, who has previously served as a mathematics instructional coordinator and math teacher at NCHS, was approved by the Naperville 203 Board of Education at its January 18, 2022 meeting. Thornton will officially begin her tenure as principal on July 1, 2022.

Thornton will become Naperville Central’s first female principal and is set to replace Bill Wiesbrook, who is retiring at the conclusion of the 2021-22 school year. Thornton cares deeply about the Naperville Central community and is committed to maintaining its tradition of excellence, while working to ensure that Naperville Central is a school where ALL students feel valued and included.

Thornton, a Downers Grove native, earned her master’s in Educational Leadership and Administration from North Central College and her bachelor’s in Mathematics from Benedictine University.

Naperville 203 Assistant Superintendent Dr. Chala Holland, who led the hiring process on behalf of the district, said she feels Thornton will be a great fit because of her commitment to supporting the academic, social and emotional growth and development of all students at Naperville Central.

“When thinking about the feedback shared from all stakeholder groups, the priorities of our district, and the importance of having a trusted, passionate, and committed leader at the helm of Naperville Central during such a pivotal time in education, Jackie’s experience will greatly enhance and accelerate the work ahead,” Holland said.

Members of the community will have an opportunity to connect with Thornton during feedback sessions planned for February. More information on these sessions will be shared as details are finalized.