Highlights from the February 18, 2020 Board of Education meeting include:

Steeple Run Elementary School led the Board of Education in the Pledge of Allegiance. 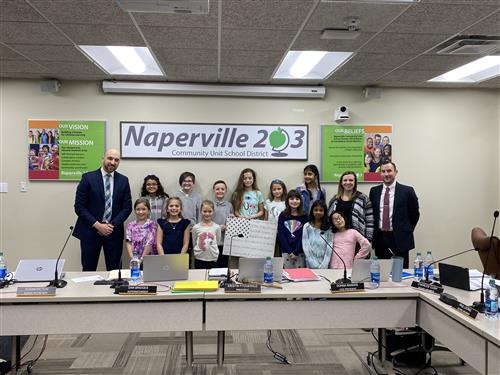 The Board of Education honored eleven students from Naperville 203 as candidates for the United States Presidential Scholars Program.  The program was established in 1964 by executive order of the President to recognize and honor some of the nation's most distinguished graduating seniors. Scholars are chosen for leadership and service to school and community. All Scholars are invited to Washington, DC in June for the National Recognition Program, featuring events and enrichment activities including the Presidential Scholars medallion presentation during a White House sponsored ceremony.

Congratulations to the following students:

Naperville North Science Bowl was recognized at the meeting for winning the State Tournament for the fourth straight year.  The North B team will head to Washington DC at the end of April to compete in the National Science Bowl. This is Naperville's fourth straight year going to Nationals and Naperville North’s tenth appearance overall.  Congratulations to Coach Kevin Farrell and his team including Allen Gu, Marissa Li, Judson Lam, Joshua Tennyson, and Geoffrey Wu. 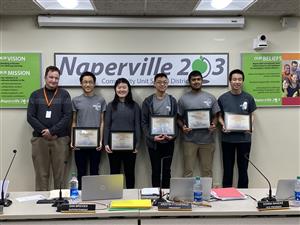 Superintendent Bridges and the Board of Education recognized Mission Makers:

Naperville North High School student, Katiana Wieser, was nominated by Principal Posey for being a community contributor.  Katiana transcends her roles on the robotics team to share her passion and excitement with the broader community through a variety of outreach events.  The most impressive example of this is Katiana’s championing of the Sit with Me campaign to validate and recognize the important role women play in creating future technology.  Katiana learned of the Sit with Me campaign through her involvement with the National Center for Women & Information Technology (NCWIT). She obtained a Red Chair through the robotics team, and a few small chairs as well, and has incorporated them in numerous events in the community throughout this past summer and fall. One such event was a recent robotics tournament hosted at NNHS where Katiana invited everyone to sit in the Red Chair and share their story to inspire young women. She captured all of these endeavors with a video: https://www.youtube.com/watch?v=Uh_yj53ftMM&t=1s 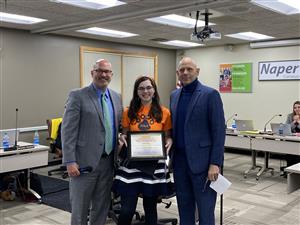 Maplebrook Elementary student, Kashyap Merchant, was nominated by his teacher Megan Clow as a Community Contributor.  On a recent vacation to India to visit family, Kashyap saw first-hand what poverty means.  He was so touched with poverty-stricken kids selling things, begging for money, wandering and sleeping on street sidewalks, he decided to celebrate his 7th birthday with kids for whom cake is a luxury food item. His parents were so moved with his thought and empathy for these children that they found a way to help him arrange a birthday celebration in a foster care where this organization picks foster kids from the street and provides them food, shelter, and education. There were approximately 175 kids in this organization and they ordered 20 lbs of cake and lunch for those kids. 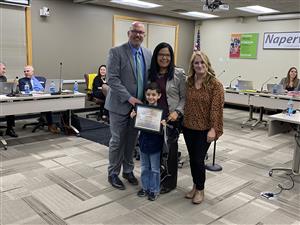 The Board discussed without action the following items:

The Board discussed with action and approved the following:

The Board delayed action on the following items for further discussion at upcoming meetings:

To view the complete Board of Education agenda, click here.